A
Answered by Meeta Malhotra

The two examples you have quoted of changing company name Snapchat vs Google are quite different, Srikant. The best starting point for a name change is to ask yourself WHY you want to change your name.

Reason #1 Name no longer reflects product /service offering accurately Snapchat changed its name because it was getting into businesses beyond chat. Luckily for them they could keep ‘Snap’ instead of having to think of an all new name. Same was true of Apple who dropped the ‘Computers’ suffix in 2007, when it launched the iPhone.  Very often, names that seem perfectly adequate when you are starting out, lose meaning as a company scales. Oracle for example, could not have continued with its original name – Software Development Labs!

Very often a group starts with one flagship company /segment that it is strongly associated with. This makes it hard to create awareness about other areas it may enter into.  Sometimes, the group holco takes on a totally separate name as in the case of Alphabet, Google’s parent company, allowing it to span different businesses. In the case of Titan Industries, even though Tanishq now contributes to the bulk of their revenue, they chose to retain the equity of the Titan brand and rebranded to The Titan Company.

Reason #3 Guarding against a negative association

The best examples of this are Phillip Morris rebranding to Altria and Anderson Consulting to Accenture.

The biggest takeaway in all these cases is that it is safest to stick to a name that is evocative at a benefit or emotional level. Don’t be too functional. Don’t be too generic. Don’t include anything that could be restrictive at a later date.  Good luck with the rebrand. 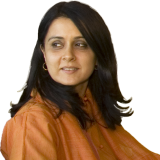 Currently I am founder at The Hard Copy, an online publication focused on design, content, growth and innovation in India. It covers original content that you won’t find anywhere else, including case studies, interviews and industry analyses. Sign up here for our popular weekly newsletter, often written by me.

I have always work at the intersection of brand, design and technology.

A closet geek, I started my career with Infosys when they were just starting up. I was one of two partners at Ray+Keshavan, the country’s leading brand and design consultancy, before its acquisition by WPP-owned Brand Union.  I’ve had the privilege of creating brands like Airtel, Kotak Bank, Mother Dairy, Titan, Arvind, Fortis, Max, Aditya Birla Capital, Vistara Airlines and many more.  Because I’ve always wanted to develop a product, I co-founded KineticGlue, a social enterprise platform that was acquired by BMC Software in 2013. I was then part of the founding team at Varana, a luxury fashion brand that aims to take Indian craft and design techniques to a global market (www.varanaworld.com) I am also an active angel investor and advisor with Kstart, Kalaari Capital’s seed stage fund.